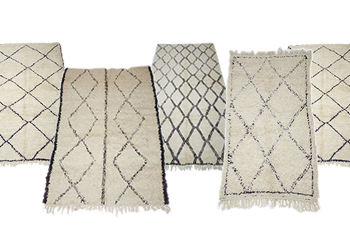 Area rugs can adorn bare floors and enhance a living space’s furnishings and decorations. Many homeowners prefer area rugs that can add a distinct exotic appeal to a room more than a traditional patterned area rug.

The History of the Berber Rug

The history of the traditional Moroccan Berber rug is rich as well as mystical. Berber rugs originally were made by North African tribesmen called Berbers back in the Paleolithic era. Traditional hand-woven carpets of the Berber tribe have a distinctive knot texture and generally come in bold, colored designs. Interestingly, the tribal symbols woven into Berber rugs centuries earlier served as the weaver’s method of communication similar to how hieroglyphics were used in ancient Egypt to pass on myths and legends to future generations.

Berber weaving is passed down from generation to generation among the females in a household. An apprentice must learn different techniques when creating ranges of color, motif, loops and patterns. Historically, the women made rugs designated for their household whereas men made specialized rugs as professional master weavers.  Like any other form of abstract art, learning the meaning of woven rug symbols can be better interpreted with extensive knowledge of a Moroccan tribes’ culture, legends, and songs. Berber rugs can be made from nylon and olefin material but are traditionally made from sheep wool or camel hair. Rug materials are hand-washed and dyed using natural substances such as saffron yellow, henna, wild mint green, and pomegranate.

The Uses for Berber Rugs

The Moroccan Berber rugs traditional diamond grid, other various symbols, and handcrafted woven knots make a great conversational piece; they represent a long history of varied spiritual beliefs and were used as prayer mats. Some rugs are designed to describe various ceremonial acts. Other rugs are adorned with fertility symbols which are bestowed to newlyweds to ensure a blessing of many children. Other symbols are created to protect the home and its inhabitants from evil spirits.

The Benefits of Berber Rugs

Weavers located in different regions of Morocco make Berber rugs based on the climate within that region. Rugs made in colder, mountainous climates are made with larger loops to protect the home from frigid temperatures. Weavers in warmer climates use a weave that is more tightly fitted rather than the average weave. Therefore, Berber rugs are made to be adaptable to either a warm or cold climate and offer emotional security for those seeking spiritual protection through tribal art.

Berber rugs are very durable and typically well-suited for high traffic areas. They are also stain resistant and are generally affordable. Berber rugs should be cleaned every 6 to 12 months to prevent irreversible wear marks. It is recommended by most professionals that Moroccan Olefin Berber be cleaned using a slightly damp or dry cleaning process. Beni Ourain Berber rugs can be found in abundance online. They exude a kind of organic vibe since no one rug is exactly alike in its pattern or geometric design.