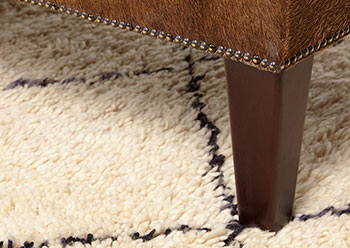 Beautiful Berber rugs, also known as Beni Ourain rugs, have long been a fashionable addition to many styles of interior design, but recently the beautiful Moroccan floor coverings have come into vogue. The stunning hand-woven pieces are popping up in many modern home decor layouts, bringing the fine craftsmanship of the rugs back into focus. More than a mere floor covering, these cozy carpets have a long story to tell, with a rich history dating back to the Berber tribe of Northern Africa.

Few items seen in the home have a history as extensive as that of the Berber rug. The textiles were first woven in the Paleolithic era. This was a time when early humans began using stone tools, between 2.6 million and 10,000 years ago. The Berber tribe hand spun the natural fibers they collected into not only rugs, but also body coverings and other fabrics that could be used to protect and shelter them. Even in ancient times, the tribe included cultural designs and symbology in their work, creating meaningful pieces with their hands that would tell an important story. For this reason, Berber rugs have major historical and artistic significance.

Today, Berber rugs are still woven in the country known today as Morocco. Tribal families still weave the beautiful pieces by hand with the designs of their culture, and are able to earn a living taking the rugs to local markets. There, tourists and shoppers can purchase authentic pieces from the source, which is an experience that many world-traveling collectors prize. The sturdy style in which the carpets are woven has been adopted by industrialized carpet brands, and Berber carpeting is an extremely common floor covering in schools, offices and other high traffic public areas. Many people think only of this industrial covering when they hear the term, missing the fascinating history of the ancient carpeting all together.

Many modern Berber rugs are made with wool, which is very likely a similar choice to that of our ancient ancestors. There is evidence that at the time, some animal husbandry was being practiced, and wool was likely the easiest source of natural fiber available to the tribal people. Modern Berber carpets are also often crafted from Olefin fiber and Nylon. Olefin fiber is perhaps the most commonly used material in creating the carpets in an industrialized setting, because it is very sturdy and stain resistant. In Tunisia, Berber carpet creation is overseen by the Tunisian authorities to guarantee that every rug is quality and that it reflects the culture originally imparted by the Berber people. For this reason, Berber rugs from Tunisia are frequently sought by collectors.

Although Berber rugs are known for stain resistance, it has been noted that Moroccan Olefin carpets should always be sanitized using a dry cleaning method. Wet cleaning and steam cleaning chemicals designed to strip dirt from most carpets reacts poorly with the synthetic fibers, and can burn them, leaving large and unsightly spots of yellow and brown. Although it is possible to remove the spots, doing so requires chemicals that are very costly, and as such, renting or investing in a dry carpet cleaner would be a wise choice for those considering Moroccan Olefin Berber.